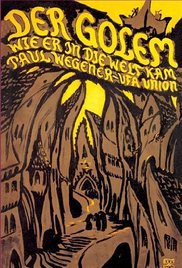 featuring a live score by NoizeChoir with guest Graeme Wilson

With the Jewish community of the Prague Ghetto threatened with expulsion Chief Rabbi Loew constructs a protector, an imposing clay monster given life by arcane magic...

Star and Director Paul Wegener created one of cinemas first horror icons with his lumbering clay goliath, a great example of early practical special effects make up and a huge influence on later classics like James Whale's Frankenstein a decade after.

NoizeChoir return to live score this expressionist masterpiece for the fourth time since premiering their original version at the old S&S site in 2014 followed by a visit to Pop Recs (Sunderland) and then The Castle Keep (Newcastle) in 2016.