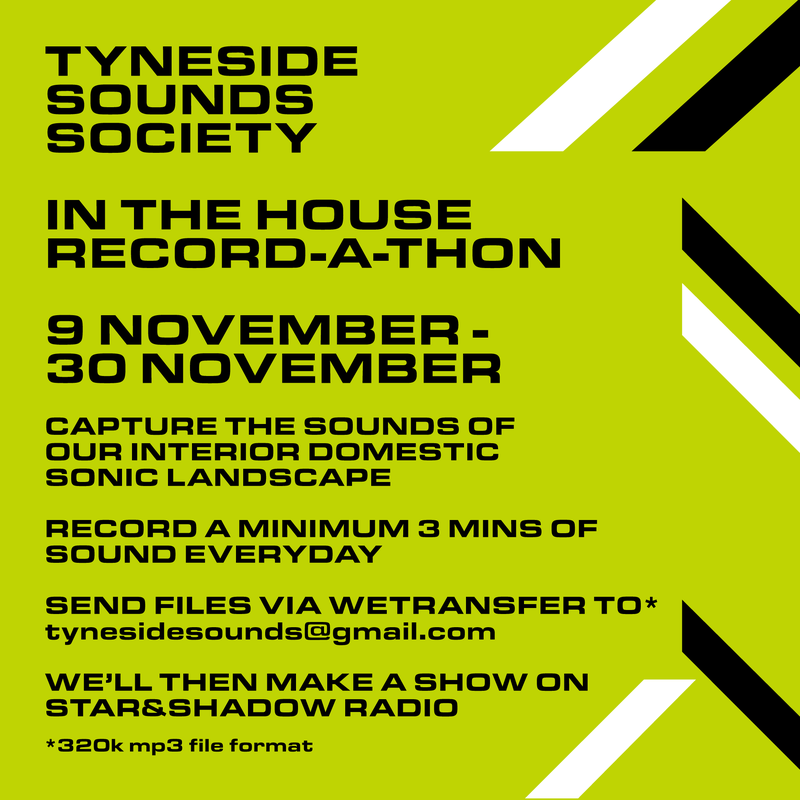 We're well and truly into the national lockdown in England, the days are getting shorter and the opportunity to get outside might be less appealing.

So with that in mind Tyneside Sounds Society are inviting you to get involved with a very special month long Record-A-Thon that aims to capture and share the sounds of our interior domestic sonic landscape.

We've been organising Record-A-Thons regular/irregular for the last couple of years and to those of you uninitiated the basic drill is we choose a location broadly in and around Tyneside and the North East of England, meet up, record sounds for an hour or two, meet back up and the sounds are shared either through the broadcast of a radio show, previously on Resonance Extra, now on Star & Shadow Radio or via the global sound map aporee.

But in these times of social distancing we've had to be more creative. In May we organised a special dawn chorus Record-A-Thon and received over 13 hours of audio from over 30 contributors and broadcast the results with a special 13 hour long broadcast on Star & Shadow Radio.

If you can record sound, either via your phone, a digital recorder or something else we are inviting you to record daily sounds of your house, flat, apartment or living space. It could be the rain on the window, the washing machine, birds outside, trafffic from your window, cooking your tea, running a tap - it's up to you.

You don't have to be a professional, forget about what is or isn't an interesting sound - it's all interesting!

This is a Star & Shadow Cinema Micro Project Commission Funded by Arts Council of England.