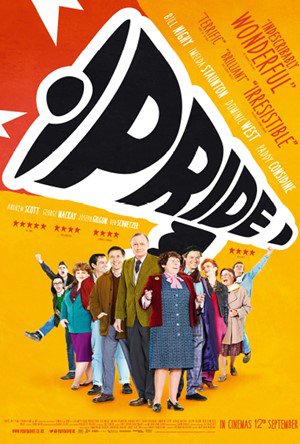 Comedy drama about the true story of a group of LGBTQ activists who team up with a Welsh mining town to raise money during the 1984 miners strike. Featuring an all-star cast including Bill Nighy, Imelda Staunton and Paddy Considine.

This film will be screened with captioned subtitles so it will be more accessible for more people.

Image description: Picture above is of the poster for the film: "Pride." A bunch of older people (welsh miners) stand smiling against a yellow background. A few younger people in 80's dress are mixed in amongst them. The title "Pride" is above them in large black and white font forming the shape of a loud speaker.