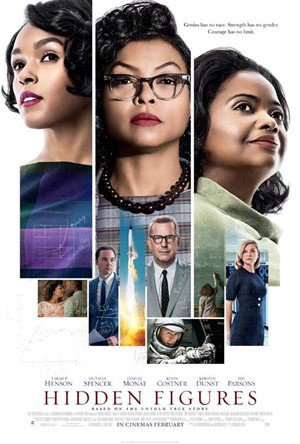 Three female African-American mathematicians play a pivotal role in astronaut John Glenn's launch into orbit. Meanwhile, they also have to deal with racial and gender discrimination at work.

The film has been chosen by our Beacon Films volunteers, who will be working on the screenings

This is a sensory friendly screening for adult audiences. To support our guests, we do not recommend the screening to anyone under the age of 12 years. No food can be eaten in the screening. Drinks are allowed.

If you need someone to support you to go to the cinema they must come to the screening with you. There are free tickets for carers or PA's.

The sound will be turned down a little lower

The film will be screened with English (SDH) Subtitles.

The seating will not be sold out, there will be space for social distancing. Mask wearing is encouraged for people who can wear them.

The screening aims to have a relaxed, supportive and inclusive atmosphere.

There will be a break room nearby for anyone to use during the screening who needs it.

Content Warning (CW) (May contain spoilers): The film portrays the racial divisions in America at the time, with segregated facilities for black and white people, and black people being held back from progress and promotion. Although no overtly abusive racist language or behaviour is shown, some racist terms are used by characters as matter-of-fact expressions. There are also examples of gender discrimination, again reflecting the attitudes of the time. See BBFC: https://www.bbfc.co.uk/release/hidden-figures-film-qxnzzxq6vlgtotg4mjuz

Image description: Poster for Hidden Figures. 3 panels with the faces of three African-American women, played by Janelle Monae, Octavia Spencer and Taraji Henson. They are looking upwards. In front of them are smaller images of other characters from the film, including Kevin Costner in a suit, next to a spaceship launching. Text at the bottom says: "Hidden Figures: Based on the untold true story".