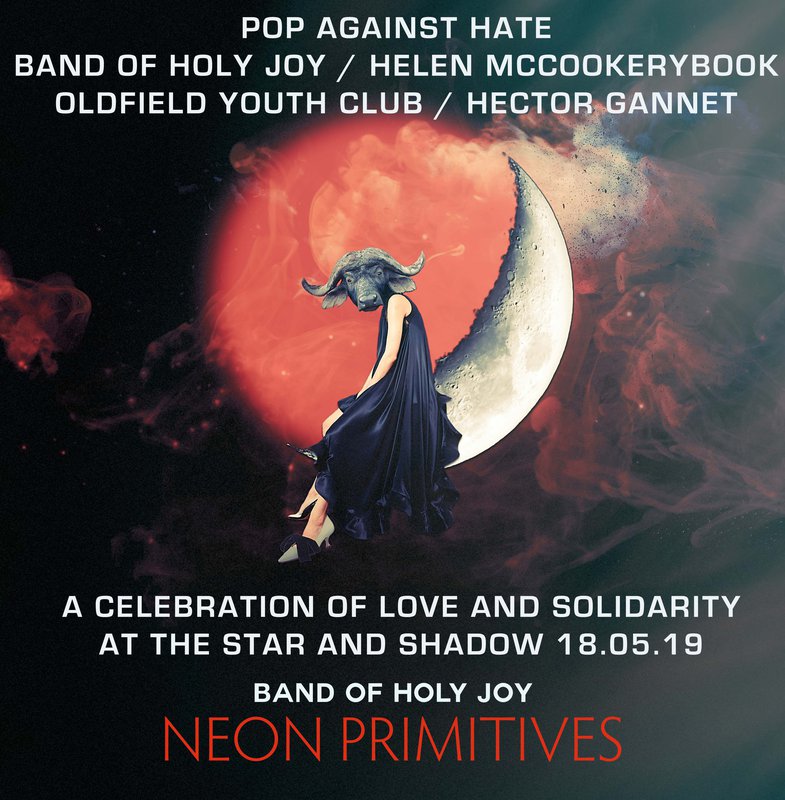 a benefit gig for Hope Not Hate

BOHJ are a six-piece of drums, bass, guitar, visuals, sixties organ and vocals who make a beautiful racket and fill the room with light and wonder. In 2017, they released the album Funambulist We Love You, a literary examination of the malaise set forth by Trump, Brexit, the rise of the far-right and a general disenfranchisement from most post-war liberal values.

The BOHJ sound is hard to describe, but they are lovers of The Subway Sect, The Jefferson Airplane, Mary J Blige, Grey and Funkadelic. They are signed to the Tiny Global label alongside fellow travellers The Nightingales and The Blue Orchids and have a new album coming out called Neon Primitives on May 20th 2018.

Born and raised in Wylam, Northumberland, Helen McCookerybook was the bass player/singer with Brighton indie band The Chefs and guitarist/singer with Helen and the Horns in the 1980s. Both were favourites of BBC Radio 1’s John Peel. After a break to raise a family, she returned to the stage as a solo artist with a new set of songs, and since then has toured the UK regularly, releasing four solo albums.

Helen has recorded with artists such as Gina Birch of the Raincoats, Vic Godard, Lester Square, Martin Stephenson, and Arrest! Charlie Tipper. Her 2017 solo album, ‘The Sea’ received airplay from BBC6’s Gideon Coe, and was supported by a 30-date tour around the UK from Ullapool to Brighton. Her duet with Vic Godard, a cover of the Francoise Hardy song ‘Rendezvous D’Automne’ was played by both Marc Riley and Gideon Coe this year. She recently released a 7” single of her ode to The Monochrome Set, ‘Saturday Night With The London Set’ supported by London and Scottish dates, and another tour in 2019.

Introducing Oldfield Youth Club…..formed in the Autumn of 2018 the OYC is made up of 3 quarters of critically acclaimed 1980's pop group The Last Party (2 No. Peel Sessions and Melody Maker Single of the Week with their debut single ‘Mr Hurst’). Featuring Simon Rivers (Bitter Springs), Neil Palmer and Kim Rivers, this trio play thoughtful catchy pop with rich lyrics and great melodies.

The idea behind OYC was to pare down and simplify Simon’s songs and as a result most of them are short and powerful and very direct, with the trademark outstanding River’s lyrical content.

The band have cut their teeth on a few gigs now ...supporting The Nightingales in Middlesbrough, The Bitter Springs in London, and more recently Austerity in Brighton.

They are currently working on their debut album ‘The Hanworth are Coming’ featuring tracks aired at the live shows… ‘Our Flowers will Grow', 'A Kind of Loving in a Loveless Town' and ‘Bob Grant’.

North Shields band Hector Gannet (aka Aaron Duff, working solo and with full band) were recently recognised as one of the 50 bands to watch in 2019 by Louder Than War magazine. In March they supported Sam Fender on a couple of UK dates and have steadily gained a reputation as a superb live band.

In 2017, Aaron Duff wrote an original live music score to be performed alongside vintage archive film footage, (dating as far back as 1929) of the heritage, culture and beauty of North East England. Commissioned by North East Film Archive with the BFI for their ‘Moving North: Coastal’ series of events, it was performed across the region.

Fans have been eagerly awaiting recorded material to emerge, and in 2019 Hector Gannet were invited into the studio with Paul Gregory (Lanterns On The Lake) to record their first track, with a full set to be recording in the coming months.