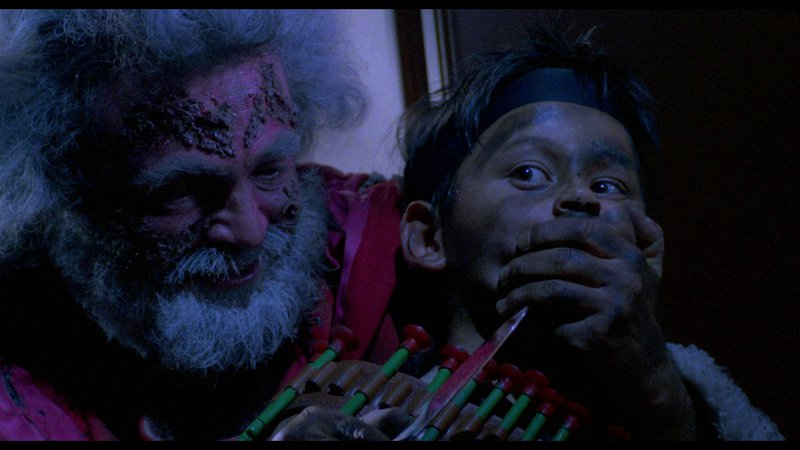 Dial Code Santa Claus (aka Deadly Games and 3615 Pere Noel) is your favourite Christmas film you’ve never seen! Thomas is a typical 1980s kid: he loves action films, computers, role-playing games, and his dog. While his power-suited CEO mother spends Christmas Eve at the office, Thomas and his grandfather are left home alone—perfect timing for a home invasion by a disgruntled stranger in a Santa Claus suit! But Hell hath no fury like a mulleted ten-year-old with an arsenal of surveillance cameras, booby traps, and a Rambo costume.

If all this sounds suspiciously familiar to a 1990 film starting Macaulay Culkin, it won’t surprise you to learn that director René Manzor once threatened a lawsuit against the folks behind Home Alone, complaining that it was essentially a remake of his film. But then again, the resemblances are arguably only skin-deep; Dial Code Santa Claus is far more stylized, bloodier, darker, and action-packed, with a series of inventive (and violent) set pieces that bring it closer to other 80s Christmastime action classics like Gremlins or Die Hard. It’s also a fascinating slice of late-80s computer culture, as the plot hinges on Thomas’s chat-room conversations using the Minitel—an early version of the internet available in France—with the man he thinks is the real Santa Claus.

Previously only available on VHS bootlegs, this newly restored film is begging for cult-film status. Get in on the ground floor and start building your shrines to Thomas de Frémont, the most badass ten-year-old in existence.

Please note that because this film has not received a BBFC rating, we are unfortunately unable to show it to those under the age of 18.

“Plays like a blend of classic Amblin and a grindhouse nightmare. To say ‘this shit is nuts’ would be an understatement.” -- Jacob Hall, SlashFilm