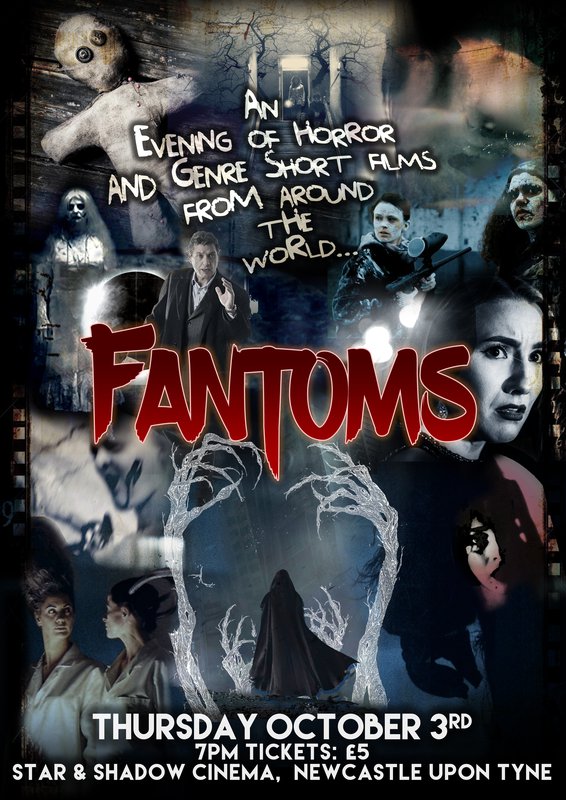 Fantoms: An Evening of Short Horror and Genre Films from around the World

Something strange, dark, and fantastic comes this way!

Fantoms, an evening of horror and genre short films, sees tales of nightmares, gods, monsters and the supernatural lay claim within the cinema’s shadows on Thursday October 3rd. A programme of thirteen multi-award-winning works of narrative and visual genius have been collected from around the world—ranging from Tokyo to Newcastle—to feed your darkest and most deviant desires. You won’t get to see these films anywhere else—don’t miss out!

To open the evening we have North East-based, up-and-coming filmmaker Daniel Fowlie and his remarkable experimental horror short Forma. A La Jeteé–inspired Giallo, Daniel drags us kicking and screaming into the mind of a depraved maniac as they stalk a young woman in the dead of night.

Did you know that, if bred in a human host, worms can breed at a very fast rate? The Breeder knows it and will make it happen in Malta filmmaker Patrick Vella’s sublimely brilliant and disturbing award-winning horror short The Breeder. Now developed into a feature film produced by DNA Strands Productions, The Breeder is certainly not for the faint of heart.

Starring Insidious: The Last Key’s Melanie Gaydos, US artist K.W. Roach brings us Dead Fuck, a tale of the private and esoteric act of necrophilia, or copulating with the dead. Aesthetically treated against the beauty of life, this perversion is viewed under a new pretence, untethered by the preconceptions of abjection. Affecting and mesmerising in equal amounts, this cinematic gem is sure to provoke reaction and discussion.

Salient Minus Ten, a sci-fi/horror short film from London-based, award-winning filmmaker Emma Dark, is a cerebral foray into the darker and more disturbing side of science fiction. On an average day, average man Adam Harper finds himself catapulted into a reality-changing game of time and chance, where the stakes are a matter of life and death. In 2018, Emma was the winner of the Albert Pyun Inspiration Award (Yellow Fever Independent Film Festival) and the Fantasy Award for Best Director (Starburst Media City Film Festival) for this wonderful, mind-bending short film.

The lines between dreams and reality are blurred when a young women in charge of two children is haunted by mysterious entities in the multi-award-winning short horror film Awakenings, brought to us by Indian filmmaker Bhargav Saikia. Stylish and atmospheric, this surreal gothic chiller will leave you gasping for more. Among its melee of awards, Awakenings was nominated for the Brigadoon Paul Naschy Award at Sitges Film Festival in 2016.

Chromophobia is the new, innovative and darkly thought-provoking sci-fi short from local filmmakers Gavin Williams and Mark Lediard. Gavin, writer of the recent critically acclaimed horror/sci-fi feature film Await Further Instructions, is no stranger to the sci-fi genre field, his previous short film Sleepworking having won a multitude of awards at highly respected film festivals around the world. Set in a post-apocalyptic wasteland, Chromophobia tells the tale of two women attempting to survive a future where the colours that surround them have become corrupted by something alien, infectious and deadly.

Helter Skelter is a bizarre and somewhat nightmare-inducing film written and directed by Washington-based filmmaker, artist and musician Peter McAdam. Helter Skelter revolves around an exploration of Peter’s personal childhood and dreams therein. Exploring a fictional TV program, the film asks the question of what happens to the characters neglected over the years since the show’s airing, their ghosts left behind to haunt the studio in a strange existential limbo. You will not want to miss this slice of cinematic strangeness!

When an ordinary day starts horribly for the protagonist in Pablo Absento’s multi-award-winning horror short Shi, everything goes wrong from that moment on. The question remains, can things get even worse? Quickly becoming a festival favourite and praised online by both Guillermo Del Toro and Eli Roth, Tokyo-based filmmaker Pablo terrifies and hypnotises in equal measures as the enigmatic figure of the creature terrorizes in an intense trip of Japanese legend. A must see, Shi is a breathtaking piece of short horror cinema.

Italian filmmaker Mariano Baino is best known for his highly successful and visually arresting nunsploitation feature Dark Waters (1993). Critically acclaimed on its release, the film won the Prix du Public at Montreal’s Fantasia Film Festival and was awarded the prestigious Special Vincent Price Award for outstanding contribution to Fantastic Cinema at Rome’s Fantafestival. Mariano’s short film Never Ever After is a modern fairytale about a young woman who undergoes a supposedly miraculous operation which promises to help her get rid of her weight worries forever. Mariano’s film is a highly stylized piece of cult art cinema, both satirical and beautiful at the same time.

The most awarded and selected short horror film of all time, with more than 500 Official Festival Selections and 120 international awards, Mr Dentonn is an evocative and imaginative story of a strange creature that attacks children on a cold winter night. Spain’s Ivan Villamel Sanchez brings us a ghastly but amazingly atmospheric tribute to the fantastic horror cinema of the 1980s. This massively successful short film is currently being developed into what will surely be an even more successful feature film.

Once seen, never forgotten, Hades is the first instalment in a trilogy of short films from Austrian artist/filmmaker Kevin Kopacha. Based on a short story by H.K. Dewitt, the film follows a woman caught in an endless dream in which she has to cross the five rivers of Hades. Packed full of symbolism and the constant notion of invading paranoia and dread, Hades is a haunting piece of abstract arthouse film that cinematically transcends even the most hypnotic short works of visual art ever seen. Open your eyes and you’ll see that you’re not dreaming…

The final film of the evening, The Shaman, written and directed by Austrian filmmaker Marco Kalantari, held its World Premiere at the Tribeca Film Festival in New York. Pulling in artists and talent from all around the world in order to fulfil his grandiose vision of a world in which a Shaman is sent on a mission to convert the soul of a giant battle colossus, Marco originally conceived of the film as a full-length feature, and it’s easy to see why. Aesthetically immense and with astonishing production values, The Shaman is an epic experience in every sense of the word, and we are hugely honoured to screen this as the headlining film in Fantoms.