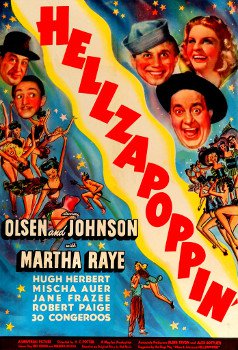 Any resemblance between Hellzapoppin' and a motion picture is entirely coincidental

A genuinely bizarre oddity, this madcap comedy is fascinating not only for its many very funny moments, but also for its purely cinematic gags which are surprisingly modern in tone and significance. The fact that Olsen and Johnson's revue-style material dispenses with plot allows them to ignore realism and play around with the medium itself resulting in a film which is breathtaking in terms of speed, imagination and sheer craziness. (adapted from Time Out)

PLUS AFTER FILM THE SWINGTIME DISCO WITH SWING EIGHT, SO COME SPIN JIGGER AND JUGGER IN THE BAR STARTS 9:30PM GET ON IN....