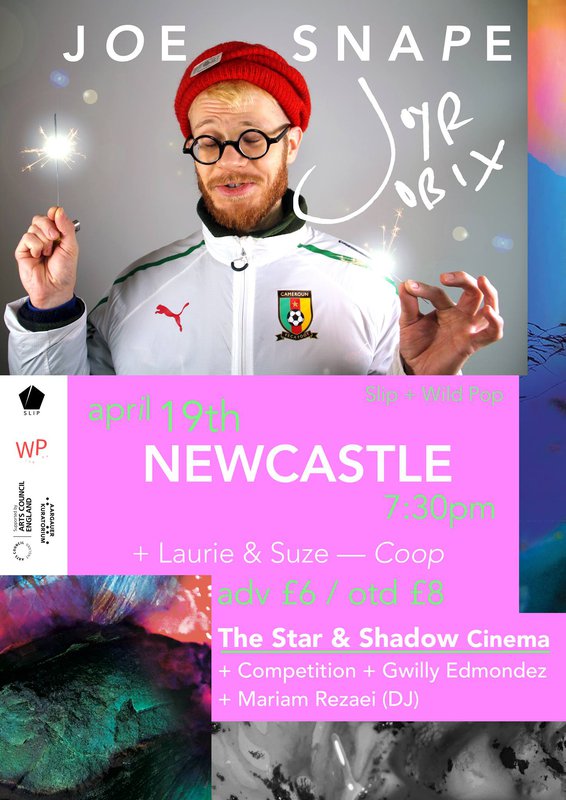 'Joyrobix' is the live version of Brummy-abroad Joe Snape’s flooring return to Slip: a suite of nimble, polychrome post-pop songs.

Born of a complicated move to the US in 2015, Joyrobix pays weird homage to a musical America that doesn't quite exist. Part soft-rock guitars, part gospel grooves, part Broadway aria, this is music that's resolutely strange and oddly familiar at once.

Fluid Radio - “with music as joyous and beautiful as this, it’s hard not to listen without a smile on your face”
The Guardian - “organised, disorganised fun”
George Lewis of AACM - “some seriously unartful shit”

The piece promises a meshing of Tompkins' sonic negotiations of pop cultural trauma, ritual self-abasement, and gunky funk, with Whaites' illusive video renderings of the alien, microscopic, and fleshy.

Competition makes (mild) pop music and performs live with a sampler and voice. The songs think about smallness and vulnerability, and build hooks from within their own limited means. Most recent tape 'You turned into a painting' was released by Slip in November 2018.

Gwilly Edmondez is a person-project forced into a pop packaging that inevitably gets mangled up by person-to-person cataclysmics. Because Gwilly is influenced by anybody you can possible think of (Billy Joel, Coil, Lucinda Williams, Laurie Anderson, AIDS Wolf…) there’s no point trying to categorise… Abstract Exhibitionism? Troubled Intimacy? Wild Pop… Gwilly Edmondez represents a coagulation of multiple character strands derived out of one private/public individual whose corporeal manifestation carries it through live shows, albums, videos and numerous collaborations in improvised music. Born in Lake Fear, Pen-Y-Bont, Gwilly has returned.

Other incarnations include Radioactive Sparrow co-founder Bill Bargefoot, JRMY PAXMN out of YEAH YOU and the writer/composer/artist Gustav Thomas which is probably his real name. In all guises he is a purveyor of reaLFake Wild Pop, tearing open the terrified quotidian regimes of colonized consciousness (through, and in, his own brain) in order to plunge intensities between the cracks exposed. This doesn’t actually, necessarily, work - per se - but it’s the in engagement of attempts where the drama takes place.