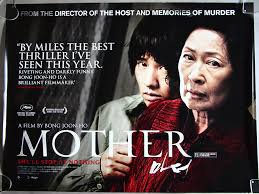 In celebration of Director Bong Joon-ho's unprecedented wins at the Academy Awards for Parasite - the first 'Best Picture' win by a non-English-language film - we're showing two of his early features that deserve a wider audience!

In a small town in Pusan, South Korea, an unnamed woman (Hye-ja Kim) lives a quiet life with her adult son Do-joon (Won Bin), working as an herbalist and acupuncturist. When Do-joon is arrested and charged with the murder of a neighborhood girl, she realises his confession was coerced, due to Do-joon’s mental disabilities. Determined to free her son, Mother begins her own investigation into the murder, fighting against everyone in her path. A suspenseful murder-mystery and a stunningly shot family drama, Mother is a haunting and disturbing film about the trials of motherhood and the lengths we may go to in order to protect those we love.

Please also join us for a screening of Director Bong's film The Host (2006) on Saturday, March 14.