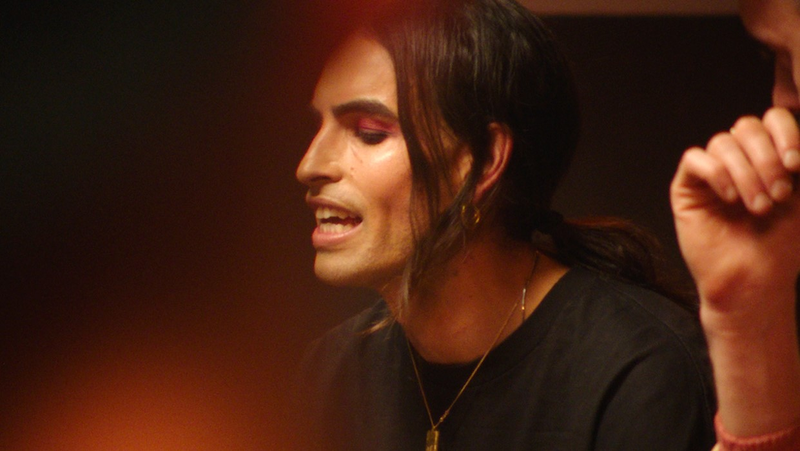 At a time when queer spaces are increasingly under threat from gentrification, Trojan Horse / Rainbow Flag is a programme of films, videos and moving image works by LGBTQI+ artists exploring the historical significance, present urgency and future possibilities of queer spaces as sites of political resistance, community and desire.

A publication featuring a text by Paul Clinton alongside the transcript from Giles’ film will be distributed at the screening.

Star and Shadow Cinema was chosen to host the Newcastle edition of this touring program because it is volunteer run and a queer friendly space – mirroring the ethos of Giles’ film.

The program is produced by videoclub and supported by Arts Council England. Touring with the support of Gasworks, London; HOME, Manchester; BALTIC Centre for Contemporary Art, Gateshead and Fabrica, Brighton. With thanks to Film and Video Umbrella.

Working directly with members of ‘Friends of the Joiners Arms’, Ian Giles’ film Trojan Horse/Rainbow Flag examines the campaign to save this iconic LGBTQI+ space. The title is inspired by campaigner Amy Roberts, when describing the cynical approach of property developers seeking to push through proposals to erase queer spaces by disingenuously claiming that their LGBTQI+ status would remain unchanged post-development. Giles’ films have been screened at MoMA PS1 in New York and Stedelijk Museum in Amsterdam.

Charlotte Prodger’s LHB is the product of her extensive research into ‘queer rurality’ – how LGBTQI+ lives are lived outside the usual urban centres that tend to dominate queer narratives, and how coded notions of queer bodies radically shift when they occupy wildernesses rather than cities.  In 2018 Prodger won the Turner Prize, she is representing Scotland at Venice Biennale 2019.

Rob Crosse’s Prime Time follows a group of older gay men as they travel together on an organised trip on a cruise ship. Crosse’s incisive eye sensitively follows the group on their journey, and the vast ocean is an omnipresence here too – adding to the sense that Prime Time is, more than anything, a vital meditation on the passing of time. His films have been shown at Jerwood Space, London and Grundy Art Gallery, Blackpool.

Pink Room presents an empty gay bar drawn from Hannah Quinlan and Rosie Hastings’ self-compiled moving image archive – an urgent strategy of resistance against the gentrifying forces that are rapidly erasing the UK’s LGBTQI+ spaces. By filming spaces devoid of revellers, the artists reveal the complex visual language they employ in their self-representation as gay. Their work has been exhibited at the Whitechapel Gallery, London and the 15th Venice Architecture Biennale.

Patrick Staff’s Weed Killer centres around a monologue adapted from ‘The Summer of Her Baldness’, artist and writer Catherine Lord’s memoir about her experience of breast cancer. Staff accompanies the startlingly candid dialogue with a series of choreographic gestures shot on a thermal imaging camera, hinting at the all-consuming nature of serious illness and treatment. The film brings together questions of queer identity, societal attitudes to illness, and the blurry boundary between poison and cure. Their work has been shown at Chisenhale Gallery, London and New Museum, New York.