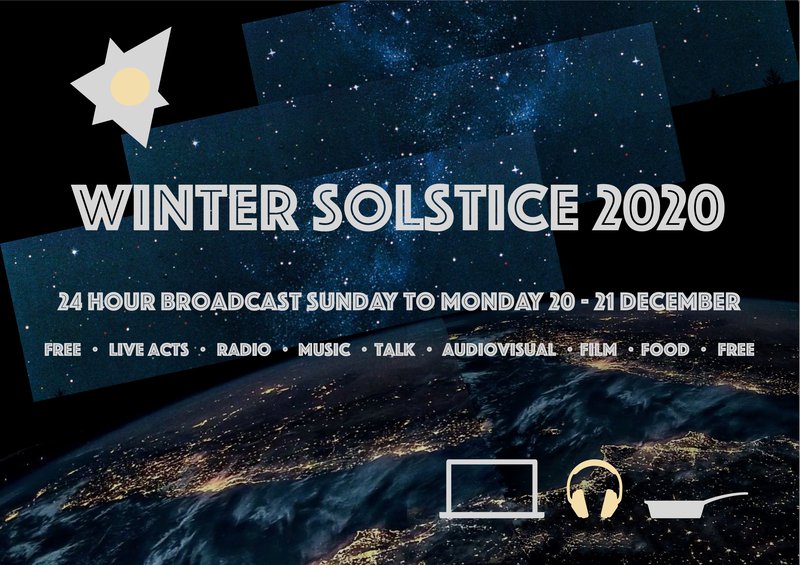 From Sunset to Sunset:

Tickets: All Free (Book your food on Eventbrite)

Tune in, Watch and Listen to our 24hr continuous a/v broadcast from Sunset to Sunset across the longest night of the year.

Solstice sonics, playlists and mixes from our star studded line up of S&S Radio Regulars including Brass Unbound & Sunday Blessings.

Listen to the Welsh Cellist Ceitidh. Warming tones and soaring vocals with transformative sound that puts a progressive twist on the alt.folk genre.

Born and raised in Newcastle upon Tyne with Nigerian roots Georgia is a Lo-fi Soulful vocalist, heavily influenced by a hip hop, RnB and acoustic soul sensibility.  Her sound is defined by soothing timbres exposing lust and heartache with a poetic lyrical narrative.

Sailing By, Shipping Forecast and National Anthem - Radio 4 addicts can rest easy... or can they?

Ken our dude in from the street transforms the ramblings of our political madmen. Not Radio 4's Today programme

Andy moves into the late afternoon for a one off Darkest Night special! Ambient float meets acoustic psychedelia & dilated song in a continuous mix to help warm up your winter