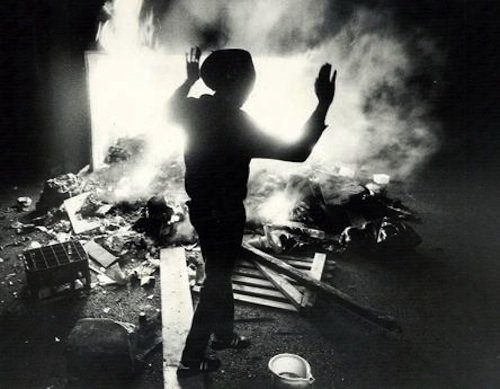 To cap off the wonderful John Akomfrah exhibit at the BALTIC Centre for Contemporary Art - which ends 27 October - we are pleased to be hosting a rare screening of Akomfrah's film Handsworth Songs (1986). In this early work, Akomfrah reflects on the October 1985 riots and unrest that took place in the Birmingham district of Handsworth as well as London. These were violent, tragic events, marked by the death of an elderly black woman, Joy Gardner and a white policeman, Keith Blakelock. Handsworth Songs refuses to reduce an analysis of these events to a simple demonising or rationalising of the rioters and their motives; instead, Akomfrah demonstrates how the media is complicit in perpetuating loops of anxieties among their white audiences over the very presence of black people in Britain.

This screening also serves as an accompaniment to an all-day workshop, also on 23 October, on 'Akomfrah and the Archive' and Newcastle University's Culture Lab. (More information to be announced as this event is put together!)

John Akomfrah first came to prominence in the early 1980s through his work with the Black Audio Film Collective, and has since become known as one of the most accomplished moving image artists in the UK. Perhaps best known for his thoughtful and complex use of archival materials in his films, as well as his nuanced reflections on the culture of the black diaspora, Akomfrah is a filmmaker who skilfully weaves past and present, memory and material throughout his work.

In cooparation with the BALTIC Centre for Contemporary Art and Newcastle University Culture Lab, we are pleased to be showing two of Akomfrah’s best-known single-screen films at the Star and Shadow:

Please come join us for this rare opportunity to see these films on a big screen!

We thank the BALTIC Centre for Contemporary Art for their generous support of this programme.